Bangkok in a Hurry

I’ve developed a love-hate relationship with Bangkok. If a city could be schizophrenic, this would be it. It’s a diverse mix of the old and new, with so many reminders of old world tradition sitting comfortably within a very modern metropolis. But scratch the surface, and you’ll discover Bangkok is as glamorous as it is tacky, it’s vibrant and it’s bizarre, it’s both frustrating and intoxicating.

The city promotes itself as Asia’s capital of pretty much everything – Asia’s Shopping capital, Asia’s Gay capital, Asia’s Capital of Cool. But I think Bangkok is the undisputed King of the Stopover. It’s best in small doses. Two days is my limit.  So here’s my foolproof plan for making the most out of your 48 hours in Bangers.

Head to a tailor first thing.  That’ll give them time to whip you up a new wardrobe.  Put the pressure on and pay an extra ten bucks, and you’ll be able to pick it up lunchtime the next day. Ascend Tailor (across the road from the Royal Orchid Sheraton Hotel, near the Si Phraya Cross Pier) is my favourite for suits and business shirts.  Master tailor Jimmy can copy pretty much anything – it helps to bring a photo.  If you ask nicely, he’ll monogram your initials onto your cuffs.

Next, hit the shops.  Shopping centres open around 10, and there’s a few mega-malls worth a look. 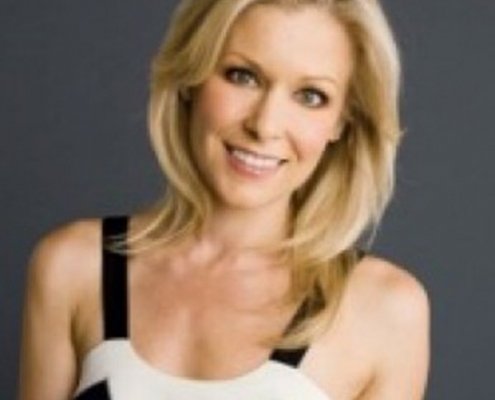 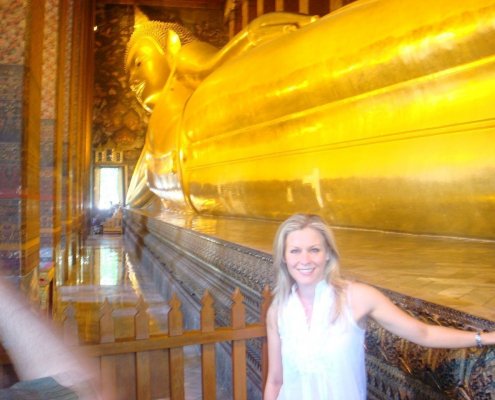 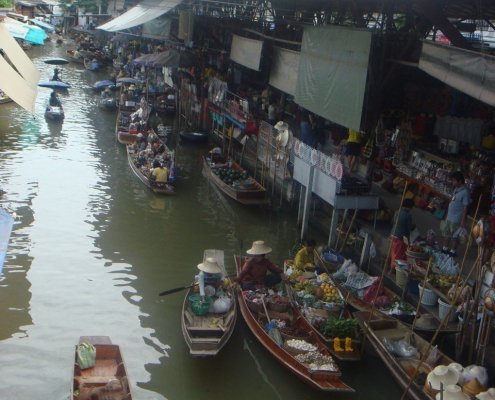 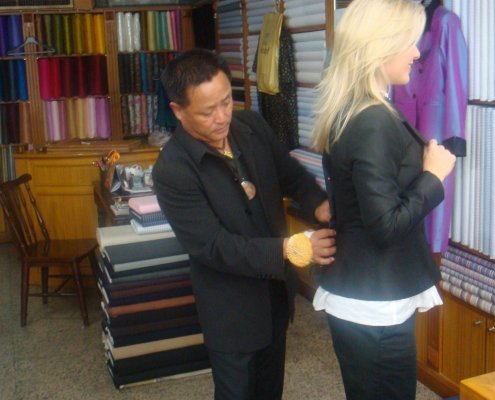 Siam Paragon is the home of every luxury store experience – from Jimmy Choo and Chloe to Louis Vuitton and Versace. The prices of luxury good aren’t always cheaper in Bangers, but there’s more variety, so you can snatch up the new season product before it hits the shelves in Oz.  (All the luxury brands also have stores at Bangkok airport – there’s not as much variety there, but the prices are a little cheaper).  Siam Paragon is also home to the fabulous Paragon Department Store, and the best food court on the planet. Don’t even think about going anywhere else for lunch.   In fact, you can fill up quite nicely just wandering around sampling the taste tests.

Nearby MBK Centre (opposite Siam skytrain) is also worth a look. It’s more of an indoor market, with stalls overflowing with bargain priced jeans, cosmetics, electronics and toys. Then, pop across the road to Central World, but make sure you give yourself enough time, because this is the largest shopping complex in SE Asia – it’s Westfield on Steroids.

If you’re in town on a weekend, head down to the Chatuchak open air Market (known as “JJ” to the locals).  Not for the half-hearted shopper, there’s 6000 stalls selling lots of everything, and all kinds of nothing – Antiques, Silks, Jewellery, Clothing, DVD’s.

After a full day of shopping, there’s nothing better than a traditional thai foot massage.  Luckily, there’s a massage centre on every corner.   1 hour only costs around $20 – and I swear, it feels like the equivalent of 8 hours sleep.

Now you’ll be in the perfect mood to relax with a cocktail and enjoy the breathtaking view at Vertigo Grill and Moon Bar, on the 62nd floor of the Banyan Tree Hotel. Get there before sunset, and watch the city change from day to night.

For Dinner, zip over to “Sirocco”, another stunning roof top bar and restaurant, on the 63rd floor of the State Tower.  This is one of the city’s MUST SEE places, but stay away from the edge if you’re afraid of heights.  Most nights a jazz band plays live, as you enjoy the delicious food, with a side order of the stunning views of Bangkok by night. 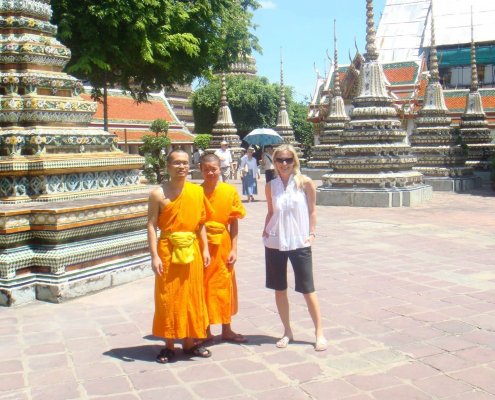 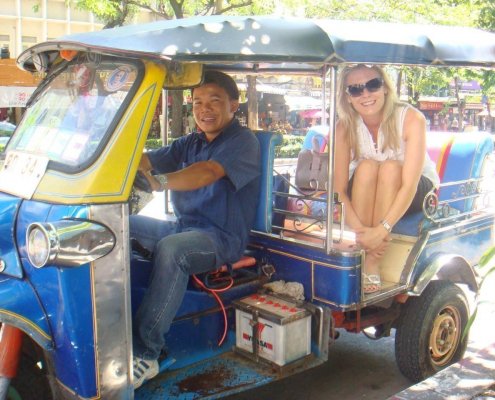 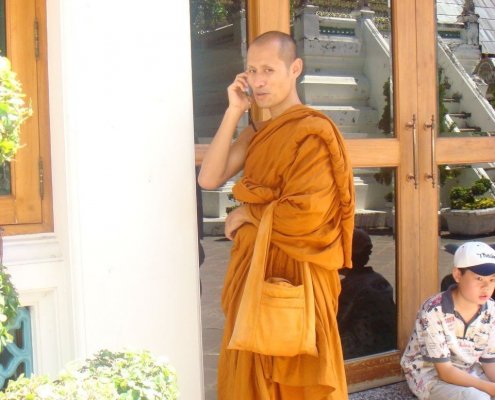 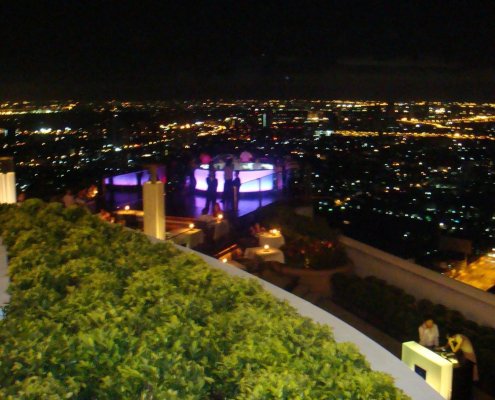 After dinner, hit the night markets at Pat Pong Road.  If you’re a first timer to Bangers, it’s worth a stroll.  But be warned – Pat Pong Road is also home to Bangkok’s most notorious red light district.  This is where you’ll find endless bars with bored looking girls in bikinis pole dancing, and doing bizarre things with their privates.  With shows titled Pussy Writing, Pussy Smoking, Pussy Whistle, Pussy Horn, Pussy Ping-Pong and Razor Blades, it’s not for the prudish.

If you’d prefer the less risque nightlife, the Met Bar (sister to London’s Met Bar) is one of the city’s most stylish lounge bars.  They rarely enforce the members only policy, so don’t stress about getting in.  87+ in the Conrad Hotel, is an upscale lounge bar.  Here, you can listen to live music alongside Bangkok’s groovy crowd.  Bed Supper Club is for the doof doof nightclub crowd – they often host world famous DJ’s – so you can dance til dawn.   If you prefer hip-hop, try Route 66.
Day Two.

Start the day with a visit to the floating markets.  I know it’s a pain to drag yourself out of bed early when you’re on holiday, but well worth the early wake up call, for this uniquely Thai experience.  The most authentic is Bang Khu Wiang, but it’s only open from 4-7am.  Damnoen Saduak is open slightly later, 6-11am.  It’s the largest Floating Market and the one you’ve seen on all the postcards – but it’s 80kms out of Bangkok, so a little tricky to get to.  It fills up with tourists pretty quickly, so get there early.

To continue your cultural experience – jump in a tuk tuk and head to the Reclining Buddha.  Taking a tuk tuk is always a gamble in this city.  The driver will promise you the world, and then possibly deliver very little.  Our Tuk Tuk Tooter Jack, at first, seemed the friendliest dude alive, offering us 10 baht to “take you anywhere”.  An offer too good to refuse, so we jumped in.  We then spent the next 15 minutes arguing with Jack, who wanted to take us on a “detour” to another shopping centre we’d never heard of, so he could get a free fuel voucher.  Most tuk tuk and taxi drivers have a ‘sponsor’ arrangement with a tourist shop. They’ll try every trick in the book to get you there, in the hope that you’ll spend a few bucks on a random tourist gimmick – and they’ll get their commission.  But unless you’re in the market for some cheap, Thai nick nacks, say a polite but firm “no thanks”. You might spend 15 minutes arguing with the driver, but you’ll save yourself a wasted hour in Thai traffic.

The Temple of the Reclining Buddha (also known as “Wat Pho”) is the oldest and largest Buddhist temple in Bangkok.  It proudly boasts the largest collection of Buddha images in the country, including the massive 46 metre long, 15 metre high Reclining Buddha.  For a dose of good karma, make sure you visit the line of copper wishing bowls. There’s a lot of bowls – so you’ll need a lot of coins – but the way I see it – that’s a lot of wishes – and a lot of good karma.  Wat Pho is also home to a working Buddhist monastery, with monks in residence.  It’s a bizarre scene, watching the monks wandering around the grounds in traditional dress, chatting on their mobile phones.

Now you’re ready to head back to Jimmy and collect your new wardrobe. If the fit isn’t perfect, he’ll fix it while you wait.  That’s a perfect opportunity to pop into the shopping alley next door and see Toi Toi for the best fake bags in town.  You’ll pay a little more than at the markets, but these are the closest I’ve seen to the real thing anywhere in the world.  Ask to see the “best bags”, and she’ll take you upstairs to a secret room, where she hides the crème of the crop from police.  It’s a clever, but not always foolproof, plan.  Toi Toi told me she gets raided by police twice a month and she was even arrested once and spent a night in jail.  She had to pay a 50,000 baht fine … and the cop who arrested her took 20 bags for himself!

If you’ve got any time (or Baht) leftover – grab another foot massage before your flight.  And you’re done !!

My advice is to plan ahead, do some research, know exactly where you want to go and what you want to see – and stick to that plan.  It’s the difference between leaving Bangkok frustrated and frazzled, or relaxed and satisfied, with happy feet and a very nice Vuitton!

Living it up in Las Vegas Scroll to top