Launching with a bang in Broadbeach, the highly anticipated Hasting Street/Noosa bar and restaurant brand, Miss Moneypenny’s is now open!

Last night, the slick new watering-hole opened its doors to over 250 socialites and corporate types – with the odd celebrity cameo – for one epic launch party! The evening featured Champagne and cocktails on flow, a pumping sound track by the ARIA award-winning Australian DJ’s Yolanda Be Cool, a steady stream of delectable canapés and even a sneak peek into the venues rooftop pool!

Miss Moneypenny’s Broadbeach is the jewel in the crown of The Good Time Group’s new multi-venue dining precinct located under the 5-star Avani apartment tower. The hot new dining haunt is delivering a cutting-edge, globally inspired Mediterranean menu crafted by acclaimed Head Chef Braden White, alongside a diverse range of exotic cocktails unlike anything else the Gold Coast has seen.

“We’re all about premium dining and drinking in an atmosphere that is vibrant and electric. You don’t come to Miss Moneypenny’s to hear the clinking of glass, you come here to enjoy yourself, have fun but at the same time experience fine dining, quality food and extraordinary drinks – without too much of the fine dining fuss,” Ben explains.  “The venue has been carefully designed to immerse diners into their own comfortable space so they can lose themselves for the time that they are here and just enjoy exceptional food and beverage without a care in the world,” he says. 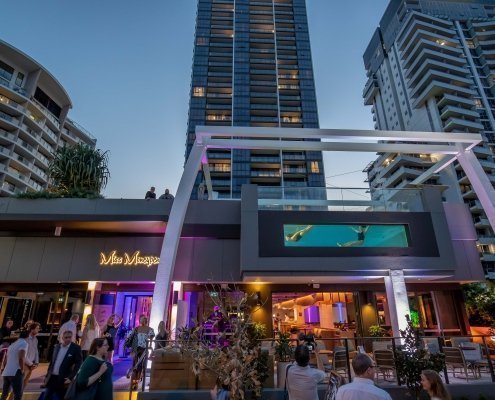 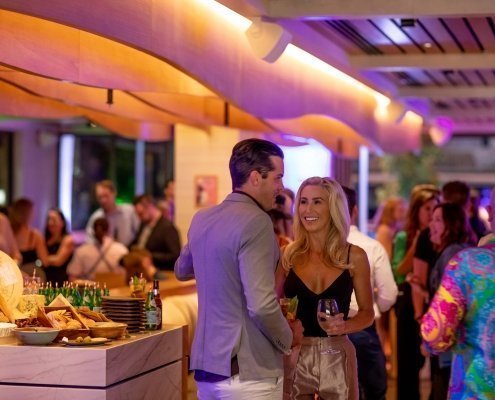 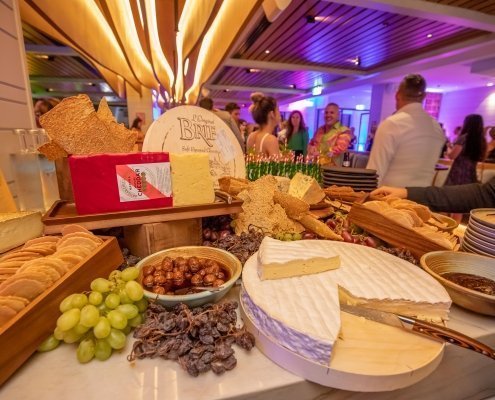 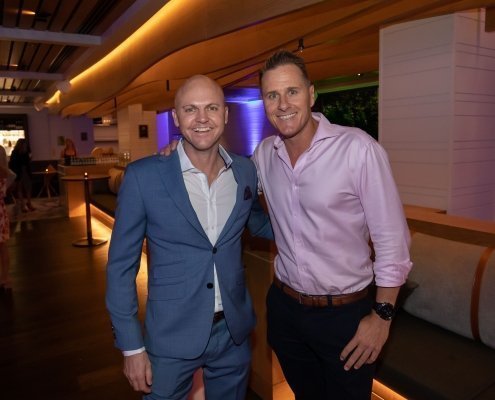 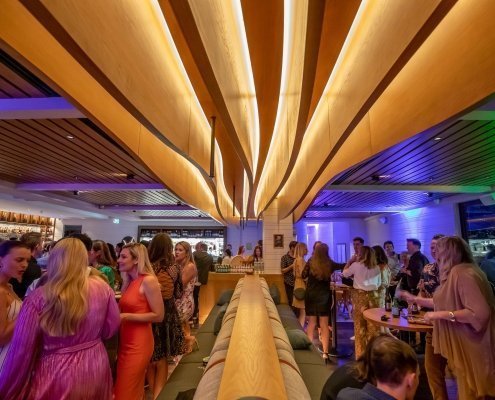 Led by Head Chef Braden White, the inspired menu at Miss Moneypenny’s Broadbeach includes so many highlights that you’ll certainly want to dine with the squad so you can sample a little of everything!

Fancy something sweet? Dessert is an experimental journey within itself at Miss Moneypenny’s Broadbeach! The Raspberry and Coconut Weis Bar or Banana and Condensed Milk are sure to tickle your fancy.

When it comes to cocktails, call to the barkeep for one of Miss Moneypenny’s signature tipples including a: Kombucha Spritz with Apérol, Kombucha, lemon, passionfruit, Prosecco and thyme; Elderflower Crush melding apple, lemon, sparkling wine and elderflower liqueur with champagne foam; Peppered Peach Iced Tea featuring gin, lemon, peach tea and black pepper topped with soda; also including some of Miss Moneypenny’s award-winning, signature drinks, such as The Instanbul Old Iced Tea, The Musketeer, and The West Indies Yellow Bird.

Ben says he’s been wanting to bring Miss Moneypenny’s to the Gold Coast for some time now, however expanding on a known entity has its challenges:

“We’ve always had a huge Gold Coast following for the Noosa venue, so it’s been a natural progression for us to open Miss Moneypenny’s here”, says Ben.

“Finding the right location was a major consideration – which I believe we have nailed. Broadbeach is the new epicentre of the Gold Coast, so when the opportunity arose to exclusively operate the food and beverage retail space under the Avani apartment tower in Broadbeach, I knew it would be a perfect fit.”

“Whenever you open a second venue of a successful stand-alone brand, the public expectation will far exceed any experience that they might have enjoyed at the first venue.  The challenge is to over deliver on people’s expectations and I absolutely believe that we will achieve this at Miss Moneypenny’s Broadbeach.”

The final Broadbeach instalment by The Good Time Group is The Rimini Room, a high-end private dining and function space for up to 120 guests, served and catered by Miss Moneypenny’s Broadbeach. The extravagant space is set to host a swagger of A-List parties, long lunches and corporate dinners away from the prying eyes of the public. The Rimini Room even boasts its own private lift from the secure carpark under the Avani ensuring complete anonymity.

Book now on 07 5655 0785 and discover more at www.missmoneypennysbroadbeach.com